Showing posts from June, 2009
Show all

June 07, 2009
The Wrestler Mickey Rourke pulls off the performance of his life (and one the best performances I have ever seen by an actor) as Randy "the Ram" Robinson. This tragically heartbreaking story is about a famous wrestler who's dealing with his age, a failing heart, and is beginning to believe it's time for retirement. He has no job skills, his love interest (Marisa Tomei) is a standoffish stripper who only regards Randy as a customer, while his daughter (Evan Rachael Wood) hates his guts and refuses to see him. The opposing challenger he fears most and wrestles with is his future loneliness. Randy lives alone in a trailer park, works part-time in the deli department at a grocery, but his faithful fans and fellow co-wrestlers love him because he's a marvelous guy and a true legend in the ring. The title of the film is a bit misleading because the story actually focuses on Randy's personal life and relationships, how he lives and gets by when outside the wrestling
Post a Comment
Read more

The Man Behind The Curtain

June 04, 2009
I stalled as long as I could. After many years of request to record our worship services and after many years of putting it off, the gift of modern technology has finally gotten the best of me. Our church recently purchased some recording equipment for our fellowship hall, which is where I lead our weekly Refinery service, so people would have access to past services. I'm not sure the exact reason why I never cared if my services were recorded. One reason is I know how I am when I hear a really great talk at a conference. I buy the CD afterward then when I listen to it again it wasn't quite as good as I remembered it. I was always afraid the same thing would happen with me. Someone would love the message and service then listen to it again and see it really wasn't that great. Another reason is the demon of self-doubt I wrestle with daily. After every message I ever give I'm immediately attacked by my dark-passenger. I convince myself that what I said didn't make a
3 comments
Read more 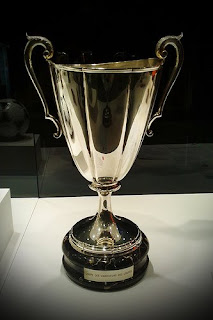 In my not so illustrious sporting career I have never, I repeat never played on a winning team. I know it's early and the Mike Gianopulos "Kiss Of Death" will probably come back to kill this but after one game of my new soccer season our team is 1-0! I'm playing with the same group I played in-door soccer with at the Y this past winter. The Kernersville Soccer Association organized their first adult league and had over 200 people sign-up. We joined as a team and added a few more folks to the mix. After getting killed in the in-door season I wasn't expecting to much this go around. I'm not sure yet if the competition is not quite what it was at the Y or we are just a much better outdoor team. We scored the first goal about 5 min into the game (that became the first time our team had ever had a lead) At the half we were up 2-0 and when the final whistle sounded we had won 4-1. Look out Barcelona here we come!
Post a Comment
Read more
More posts