Showing posts from June, 2008
Show all

My Movie Review: The Happening

June 16, 2008
"This movie's hurt'n" - Ryan McDaniel "There is not one redeeming quality from that movie" - Beth Gianopulos "There has to be a good reason why this movie was so bad. Maybe is was M. Knight's way of giving Hollywood the middle finger." - Kipp Garrett Those were just a few of the quotes from my wife and friends as we stood around outside the theater trying to comprehend what we just saw. I'm as big of a M. Knight Shyamalan fan as you'll find anywhere. I not only have loved all is previous movies (including The Village and Lady in the water) but I own them. Ever since I read the premise last summer of his newest film 'The Happening", about earth finally having enough of mankind destroying it so it begins to purge the world of humans by releasing a poisonous gas into the air, I thought this movie would be a work or art. Boy was I wrong. What I got was 89 minutes of bad story, bad acting, bad dialogue, and unlikeable characters.
1 comment
Read more

June 11, 2008
Everyone keeps asking me, "How was it?". To quickly sum it up, Hawaii is everything your imagination tells you it will be and more. Words and pictures can't describe the shear beauty of the islands. It was an amazing place to visit and I'm just glad I have the chance to say I've been there. Here are some random observations I made and my final thoughts on the trip: - Every one there was very friendly. From people on the street, to the restaurants, to places we visited, everyone we came in contact with was very nice. - The pace of life on the the Big Island was very slow, much like the south. The only difference is in the south (since that's where I live I can say this) folks seem slower because they don't have a choice. It's just the way we're wired. There, people made "slowing down" not only a choice but a priority. - The Big island is still very unblemished. It's not taken the population or tourism hit that some of the other isla
Post a Comment
Read more 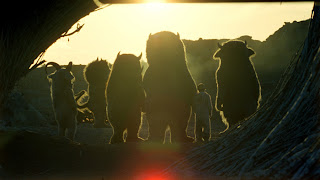 My kids LOVE the book "Where the wild things are". So you imagine my excitement when I heard Tom hanks was making the story of Max and his wild friends into a major motion picture. The film was set to be released this October but word has just come out that it has been pushed back until Fall 2009 because the studio thought the first editing of the film might be to scary for young viewers. At least we have these cool pics to tease us until then.
Post a Comment
Read more

June 09, 2008
I've watched several movies over the past couple of months both on DVD and in theaters. Here is a long overdue review of some of the more memorable ones. Prince Caspian Maybe it was the over hype of everyone saying this film was better then "The Lion, Witch, and the Wardrobe", but I left feeling a bit disappointed. It was nowhere near as good as the first Narnia film. My main problem with "Caspian" was it seemed to be one of those movies that tried to hard to please every movie goer instead of focusing on one thing and doing it well. The fight scenes were much more intense in this film compared to "Lion" which was fine by me, but then I suspect the directors thought they might be too intense for younger viewers so they would stop the action to allow a silly, childish comment by one of the actors to lighten the mood. Either be a kids film or an action / adventure film. Don't try to do both. LOTRs pulled it off and Narnia could have too. 2 1/2 Star
1 comment
Read more

June 05, 2008
My buddy Mike shared a quiz with me that asked the question - What's your theological world view? Below are the results from my "test". You scored as a Evangelical Holiness/Wesleyan You are an evangelical in the Wesleyan tradition. You believe that God's grace enables you to choose to believe in him, even though you yourself are totally depraved. The gift of the Holy Spirit gives you assurance of your salvation, and he also enables you to live the life of obedience to which God has called us. You are influenced heavily by John Wesley and the Methodists. Evangelical Holiness/Wesleyan 86% Emergent/Postmodern 68% Classical Liberal 54% Charismatic/Pentecostal 46% Fundamentalist 39% Neo orthodox 39% Reformed Evangelical 29% Roman Catholic 29% Modern Liberal 7% I guess you can take the kid out of the Methodist but you can't take the Methodist out of the kid. Here is the link if you want to give it a try: http://quizfarm.com/test.php?q_id=43870
Post a Comment
Read more 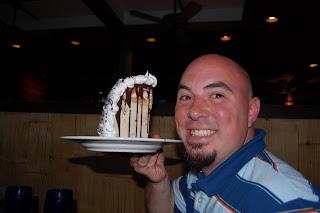 You would have thought with all the outdoor activities I did while in Hawaii (hiking, swimming, etc) that I would have lost a few pounds. But with all the great food around it made that thought look very foolish. here is a list of some of my favorite place we ate while on the Big Island: Huggo's www.huggos.com Huggo’s began in 1969 as a casual gathering spot where local fishermen met to "talk story." In the almost 40 years since then it has earned a reputation as the Big island's premiere restaurant for fresh seafood, oceanfront ambiance and casual elegance - an irresistible combination that could only happen in paradise. Huggo's had by far the best fish I have ever eaten. We made reservations in advance so we could sit in one of the ocean front tables. Above is the massive dessert we had to top off our delicious meal. Island Breeze Lü'au www.islandbreezeluau.com Rated the best lü'au on the Big Island by visitors, travel writers, and kama'äina local
Post a Comment
Read more

My Hawaiian Vacation - The Big Island Part One: Places To Go 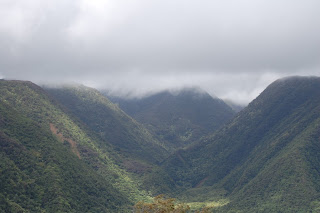 Instead of having one long mega blog that details all of my happenings while on the Big Island in Hawaii, I've decided to break it up into 3 different ones. The first will be my top 10 places I went/did, second the top places I ate, and third my overall thoughts and final opinion on the trip. But first a little about the island. The aptly-named Big Island is, by far, the largest island in the Hawai'ian chain – combine the size of all the others, double that figure, and the Big Island is still the larger land mass. Interestingly enough, this extra space does not translate to population since approximately 140,000 people, many of them living in urban areas like Hilo and Kona (We stayed in Kona), call the island home. A nature-lover's paradise, the Big Island has remained relatively unspoiled, and its protected forests include the Kau, Kapapala, and Ruu Makaala Reserves in the south and the Mauna Kea, Kohala, and Hakalau Reserves in the north. At the heart of the island are tw
Post a Comment
Read more

June 02, 2008
I'm finally back from my eight day trip to the Big Island of Hawaii. I hope to have some trip details posted within the next day or so.
Post a Comment
Read more
More posts