Showing posts from April, 2009
Show all

April 28, 2009
Last Thursday Beth, myself and our friend Jennifer went to see Jimmy Buffett in concert in Raleigh. Her are some of my observations... First the amazing song set: Summerzcool Tour Time Warner Cable Music Pavilion - Raleigh NC Thursday April 23rd, 2009 1 Lage Nom Ai 2 Stars On The Water 3 SummerZcool 4 It's Five O'Clock Somewhere 5 Manana 6 Conky Tonkin' (with Nadirah on vocals) 7 Changes In Latitudes, Changes In Attitudes 8 Volcano 9 Cheeseburger In Paradise 10 Come Monday (with the Beach Band) 11 Son Of A Son Of A Sailor 12 Brown Eyed Girl 13 One Particular Harbour 14 A Lot to Drink About Recess from SummerZcool 15 My Head Hurts, My Feet Stink And I Don’t Love Jesus (Jimmy on uke with Mac on guitar) 16 I Heard I Was In Town 17 Last Mango In Paris 18 I Feel Like Goin’ Surfing in a Hurricane 19 Southern Cross 20 Coast Of Carolina 21 Rhumba Man 22 A Pirate Looks At Forty (Jimmy solo) 23 Gypsies In The Palace 24 Margaritaville (with the lost verse) 25 Fins First Encore:
Post a Comment
Read more 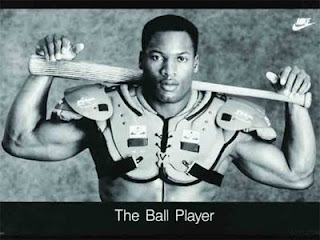 I love April. When it comes to sports, there is not a better month during the entire year. The NBA and NHL playoffs begin. Golf has the masters. The NFL has the draft. And of course there's the start of baseball season. Baseball has always been my favorite sport. I've never been any good at it but I love to watch it. Growing up I collected years and years worth of baseball cards, which I still have boxed up in my old room at my parents home. When it comes to following the game, the Atlanta Braves will always be my favorite team and Bo Jackson will always be my favorite all-time player. As a teenager my walls were lined with Bo Jackson posters. As my son is now watching a little bit of sports with me (his favorite "player" is Tiger Woods) I wish he could have experienced the phenomenon that was Bo Jackson. I ran across the following article that describes Bo better then I ever could: Between the Seams Recalling Bo Jackson's days in baseball Twenty years after h
1 comment
Read more

April 14, 2009
Beth and I quietly put our house on the market a couple of months ago just to see what would happen. We like were we are currently living but we would love to be closer to town which would put us closer to church, the Y, shopping, and our friends. (In that order - HA) With the housing market like it is (or at least what we're being told by the media and government) we thought it would take a while to sell. Wrong. We signed the papers last week and as of July we'll be homeless. We have no idea where we might move. The good thing is the couple buying our home doesn't want to close until July so that buys us a few more months of looking. I also threw the idea out to Beth that if we were ever going to make a major move then now is the time. Our house is sold, we're debt free, the kids haven't started school yet and we've always talked about making a big move to another state (or country) I've come up with a list of place we could move based on places we'v
2 comments
Read more

Has "The Office" Jumped The Shark?

April 10, 2009
"Jump the Shark" is a colloquialism coined by Jon Hein and used by TV critics and fans to denote that point in a TV show or movie series' history where the plot veers off into absurd story lines or out-of-the-ordinary characterizations, particularly for a show with falling ratings apparently becoming more desperate to draw viewers in. In the process of undergoing these changes, the TV or movie series loses its original appeal. Shows that have "jumped the shark" are typically deemed to have passed their peak. The phrase refers to a scene in a three-part episode of the American TV series Happy Days, first broadcast on September 20, 1977. In the third of the three parts of the "Hollywood" episode, Fonzie (Henry Winkler), wearing swim trunks and his trademark leather jacket, jumps over a penned-in shark while water skiing. Now it pains me to ask this but has my beloved "Office" jumped the shark? This season began with such promise but over the
2 comments
Read more

My Day At The Masters 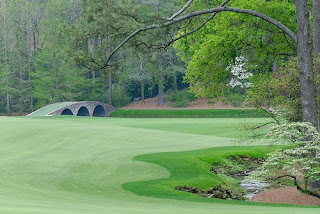 I've gotten to the point in life where I enjoy watching golf as much if not more then playing it. I've never had the time or money to invest in practicing the rounds and rounds necessary to become a somewhat competitive player. If I play 4 times a year I'm doing good. I grew up attending the GGO (Greater Greensboro Open). At that time I had hardly swung a golf club so little did I know what I was witnessing those athletes doing was so remarkable. Now I get it. Now I know how hard golf is. In my opinion it may be the hardest sport on the planet to be consistently great at. I haven't been to a PGA event in many years but I still love taking a lazy Saturday or Sunday afternoon and watching some golf. Especially with the advent of HD television. Every sport has it's crown jewel. The one event that every fan dreams of attending at some point in their life. As a golf fan, that event is the Masters. It's called the "hardest ticket in sports" for good reas
Post a Comment
Read more
More posts