Showing posts from August, 2007
Show all

August 24, 2007
I ran across this fascinating article about the faith of Mother Teresa. I always hear Christians say they feel guilty about their faith struggles. Her letters, which this article and new book are based on, look like something we'd read in the book of Psalms. This is a great reminder that you are not alone in the way you feel. Letters Reveal Mother Teresa's Secret CBS News (Aug. 24) In life, she was an icon for believers of God's work on Earth. Her ministry to the poor of Calcutta was a world-renowned symbol of religious compassion. She was awarded the Nobel Peace Prize. Mother Teresa had a calling, she told CBS News in a rare interview, based on unquestioned faith. "They are all children of God, loved and created by the same heart of God." But now, it emerges that Mother Teresa was so doubtful of her own faith that she feared she was being a hypocrite, reports CBS News correspondent Mark Phillips. In a new book that compiles letters she wrote to friends, sup
Post a Comment
Read more

The Winston-Salem Journal, our local major newspaper, came by last week for an interview with Mike Willard and myself about our recent church merge. Here is the article from the paper: Fused Spirit: Churches say God guided merger and new church's best days are ahead By Melissa Hall JOURNAL REPORTER Mike Gianopulos of The Refinery (left) and Mike Willard of Main Street Baptist Chrurch. (Journal Photo by Kelly Bennett) KERNERSVILLE The members of The Refinery, a local nondenominational church, have met in the pastor’s home, a movie theater and other locations around Kernersville since Mike Gianopulos started the church about four years ago. The Refinery started with about nine people, Gianopulos said. Its membership has grown to about 100. Gianopulos said that about four out of 100 new churches make it past two years. The Refinery was healthy and growing, but it was at a crossroads. Gianopulos realized that if it got much bigger he would be spending less time with pastoral duties an
Post a Comment
Read more Well I'm now the newest member of the Xbox 360 club. After months of hearing all my friends talk about how great theirs are, I broke down and bought one. I kept saying I couldn't spend the $350-$400 asking price a game system and if I ever did by one it would have to be a great deal. So last week I found that "can't beat" deal and now I have my Xbox. Along with the like new system I received the following games with it: Halo, Halo 2, Call of Duty 3, and Chrome Hounds. I'm also signed up to Xbox Live and played some great games of Catan last night. if you're online and want to add me as a friend, my gamer name is: kvillegreek
2 comments
Read more

My Ever Changing Life

August 18, 2007
I turned 33 this past week. I have a 2 year old daughter and a soon to be 4 year old son and both seem to gain more and more energy everyday. Beth and I are quickly approaching our 10 year wedding anniversary. I'm entering yet another new season of ministry. Beth has taken on yet another new role, this time as a college professor. Why are we so addicted to change? Beth and I were discussing recently how some folks we know seem to lead these dull, slow, non-eventful, unchanging, boring lives.... and we envy them. It seems like every week brings some kind of new wrinkle into our lives and it's nobody's fault but our own. Maybe it's the paths we've chosen or our failure to ever stop or at least slow down. The same choice we'll make that will give us an indescribable feeling of a breath-taking leap as we "grab life by the horns" is the same choice that wears us out and makes life go by so fast it seems like we're in a constant state of change. No mat
Post a Comment
Read more

August 14, 2007
I spent a large portion of my day with a group of my students at the Second Harvest Food bank of NC. http://www.hungernwnc.org/ We arrived at the warehouse around 9am for a few hours of work doing an unknown job. I had guessed we might be sorting some of the donated food or helping with distribution but instead we were all put on potato duty. Our job was to sort 50 lb bags of potatoes by re-bagging the good ones and tossing the rotten ones. And by rotten I mean the ones that would turn to a brown greenish mush the minute you touched them. The smell is indescribable. My kids have had dirty diapers that smelled better. My students all worked really hard and made the best of a smelly situation. On a side note: I did get reprimanded by one of my adult volunteers for driving to fast on the highway. Ahhhh...it's nice to be back in youth ministry!
Post a Comment
Read more 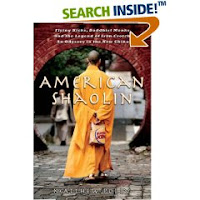 I've been wanting to read a certain golf book that came out this past year but after a few months of seeing my name slowly drop from 11th to 9th on the "next in line" list at our library, I decided to search for something else. I ran across this book on a list of summer "must reads". The brief summary intrigued me enough to give it a chance. What I discovered may be the best book I'll read all year. There just aren't enough books written like this; an unusual topic and a true story about a guy who takes it upon himself to make his Kung Fu dream a reality! If you want a story so unique and unexpected, you've got to pick up Matthew Polly's American Shaolin. AMERICAN SHAOLIN: FLYING KICKS, BUDDHIST MONKS, AND THE LEGEND OF IRON CROTCH: AN ODYSSEY IN THE NEW CHINA blends a coming-of-age memoir with a survey of kung fu in 1990's China. Matthew Polly always dreamed of journeying to the Shaolin Temple in China to become a tough fighter like his TV s
Post a Comment
Read more

My Life In A Nutshell

After a month I finally have the time and energy to sit down and blog a little. Forgive me if this seems like it's all over the place but I have about 4 weeks of stuff to remember. The big church merge is finally over. (or maybe it's just begun) Either way the Refinery is now part of Main Street Baptist Church ( http://www.msbc.cc/ ) The move went very smooth and last Sunday was our first as a newly formed merged church. The folks at Main St. have been GREAT. They have welcomed us with open arms. There's an energy in the air that is very contagious. Wake hired our new basketball coach yesterday. How Dino will be able to hold that program together after the death of Skip is beyond me. He's got an unenviable task in front of him. I heard today that Wake has just about sold out all their games for the upcoming football season. there was a time not to long ago when you couldn't give Wake football tickets away. It's amazing what an ACC championship will do for you. I
1 comment
Read more
More posts