Showing posts from February, 2013
Show all

5 Things Every Young Pastor Should Know 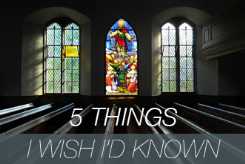 The following is a great article written by Rob Pochek. I'd wish someone would have shared this with me over a decade ago. I was probably to immature to listen but it's good advise anyways. I left my breakfast meeting with a young pastor and realized, with a measure of sadness, I was no longer a "young pastor." He was facing a number of ministry challenges that seemed very familiar to me. As I shared with him some of the lessons I had learned, he remarked, "I wish I had known this three years ago." It occurred to me that the lessons I shared with him were ones I wish I had been told when a small country church allowed a rough, unrefined college student to get his feet wet in ministry. As I look back, there are (at least) five things I wish I had been aware of when I was just starting out: 1. You are pastoring a parade. The first time I had a family leave the church I was leading, I was personally hurt. I thought I had really messed up as a pastor,
Post a Comment
Read more

Night Celebrating Biblical Masculinity February 16th, 2013 7:00 - 8:30 P.M. Miller Park Community Center - 400 Leisure Ln. Winston Salem, NC 27103 Man Up is a combined effort of several ministries in the Triad area including: Empowering men to be a force for the Kingdom of God. Helping men understand the heart God has given them. One of the main goals of Love Out Loud is coordination: Understanding how local churches and Christian organizations are working towards the flourishing of our city, coordinating for maximum use of resources and collaborating for deepest impact and loudest witness...
Post a Comment
Read more
More posts