Showing posts from April, 2007
Show all

April 30, 2007
I'm not to sure what happened to this past weekend but all I know is I just woke up and it's Monday. Where did the last three days go? Beth had her 10 year reunion at Salem College this past weekend. She left at 11am on Friday and I didn't see her again until 1:00 pm Sunday. No she didn't have to go out of town, the college is only 20 minutes from our house. The deal with Salem is it's an all girls school (A women's college if you ask my wife or any other graduate) so it basically functions as one big sorority. (Again I'm sure I'm not winning any popularity votes with the Salem chicks) Which is not necessarily a bad thing. My wife has closer bonds with her college friends then anyone else I know. Most people couldn't believe Beth's reunion would take all weekend but with Salem there really isn't much of a choice because the community between the women is so tight. So when reunion weekend comes around, it isn't just an activity, it'
Post a Comment
Read more 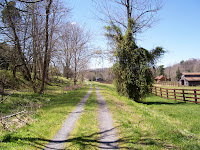 www.vacreepertrail.com Once we left Bedford we headed down to Abingdon. Abingdon is located in the southwest corner of VA just a few miles from Bristol, TN. After checking in to our hotel we freshened up for a dinner and a movie date which is near impossible to have once kids enter your life. The movie of choice was Will Ferrell's latest, "Blades of Glory". We didn't know of any friends that had seen it so we weren't sure what to expect on the old laugh 'o meter. "Blades" ended up being one of the funniest movies I've seen in months. An easy 3 1/2 stars. Saturday we got up and headed off to meet our bike shuttle. The way the "VA Creeper Trail" works is it runs 34 miles from Abingdon to White Top. You can choose which direction you want to ride but the most popular (and easiest) is from White Top down to Abingdon. Once we arrived at the local bike shop (there are several around to choose from) they loaded our bikes up on a large trailer
Post a Comment
Read more

My Anniversary Trip Part One 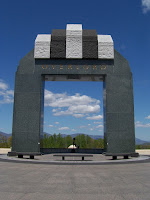 This past weekend Beth and I got away for a couple of days to celebrate our 9th wedding anniversary. This years trip took us up to Bedford , VA and Abingdon, VA. Why those two spots you might ask? Allow me to explain. Bedford, VA is the home of the National D-Day Memorial. Bedford lost more men per-capita then any other US city/town on the Allied Invasion of Normandy. Abingdon is home to the Virginia Creeper Trail, a 34 mile bike route from White Top Mountain to Abingdon. I've decided to break our trip into two parts since it was like two trips in one. After reading "The Bedford Boys" by Alex Kershaw and then finding out Bedford, VA was less than two hours from my home, I've been wanting to check it out. Beth was along with going at the very least to please me but after she read the book during the week leading up to our trip, she soon realized why this was such a "must see" memorial. I'm not sure what I expected but the memorial was much different then
Post a Comment
Read more

April 13, 2007
If you have kids then you'll appreciate this video. If you don't have kids, this is what you have to look forward to...
1 comment
Read more 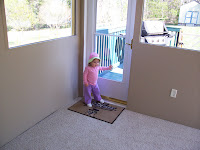 After 3 months of work, our new playroom is now finished. What was formally a screened in back porch is now a new room for the kids to keep all their toys and stuff while they play. Bud did most of the work. He installed the vinyl siding on the outside and then did the insulation and sheet rock on the inside. we had the windows and carpet installed by folks here in town and I did the painting. Here is the finished product:
1 comment
Read more

April 11, 2007
I'll cut right to the point: There is NO SUCH THING as global warming. There, I said it. People have been buying into the myth for to long and when sports magazines begin focusing on it you know it's out of control. In the newest issue of Sports Illustrated (which is owned by Time magazine) they feature a several page article on the topic of global warming. Why?? Are sports in this country that boring that sporting publications are now having to throw their 2 cents in about the hot political topic of the day? I found it was ironic that the week S.I. came out with this one-sided opinion that a massive snow front moved through the mid-west causing the postponement of several baseball games. Now for some facts: 1) While ground-level temperature measurements suggest the earth has warmed between 0.3 and 0.6 degrees Celsius since 1850, global satellite data, the most reliable of climate measurements, show no evidence of warming during the past 18 years. 2) In fact only the Nor
5 comments
Read more

April 10, 2007
I've decided to create a new blog. This one will focus solely on all things sports. Watching, reading, participating, and anything else sports worthy I can get into has been a bit of a hobby of mine for the past 20+ years. Along with my sporting participation comes lots and lots of opinions. This is where my new blog comes in. http://thesportsgreek.blogspot.com/
Post a Comment
Read more

April 06, 2007
Good Friday is the anniversary of Jesus' death on the cross. According to the Gospels, Jesus was put to death on the Friday before Easter Day. Since the early church Good Friday has been observed by fasting and penance. In the Orthodox, Roman Catholic, and Anglican traditions, the celebration of the Eucharist is suspended; liturgical service involves veneration of the cross, the Passion narrative from the Gospel of St. John, and communion using bread and wine consecrated the previous day, Holy Thursday. Other forms of observance include prayer and meditation at the Stations of the Cross, a succession of 14 images, usually on wooden crosses, depicting Christ's crucifixion and the events leading up to it. Why call it "Good Friday"? Calling the day of the Crucifixion ‘Good’ Friday is a designation that is peculiar to the English language. In German, for example, it is called Karfreitag. The Kar part is an obsolete word, the ancestor of the English word care in the sense
2 comments
Read more

My Ramblings For The Week

April 05, 2007
Idol So I wake up and the first headline I see is that the kid all of America hates made it to the final eight on Idol last night. Two thoughts quickly came to me head. 1) How stupid do those that who have claimed Idol was fixed (when Clay didn't win or when Daughtry got the boot last season) really feel right now. Obviously Idol isn't fixed or that kid wouldn't have made it this far. Clay and Chris weren't good enough to win, or should I say they just didn't have enough fans phoning in their numbers. This whole controversy with Sanjoloyia or whatever his name is can put to rest all the "Idol picks it's own winners" rumors. Maybe now everyone will see it as it really is - a millions of teenage girls fighting a handful of adults each week as they try to keep their favorite performer in. And 2) the second headline I saw after Idol was the British soldiers getting released. Why was this an afterthought? Why wasn't this the lead story? This country is
Post a Comment
Read more

April 04, 2007
I knew this day was coming. Once folks began arguing over whether or not to greet people with “Merry Christmas” or “Happy Holidays” I knew it would only be a matter of time before Easter would come under it’s on attack. The schools started this process of de-Easterizing (is that a word?) this time of the year a while back when Easter vacation was turned into Spring Break. So it was of no surprise to me as I watched on the local news the other night a group of Christians who were upset that stores are no longer calling it an Easter holiday but springtime holiday and Easter egg hunts are now being called Spring egg hunts complete with springtime bunnies. As I sat and listened carefully to both sides of the argument I was left to wonder for myself, are we really missing the point? Without getting into a long history lesson of the origins of the word Easter, all you have to know is this, Jesus never called it Easter. He never once mentioned that after his resurrection we would remember h
Post a Comment
Read more

My Bracketology: The Results Blog

April 03, 2007
At the beginning of the NCAA tournament, I devised and very unscientific research study to see what strategy worked best when filling out my bracket. As a refresher from a previous blog, this was the out come of my picks along with my various strategies: My Brain: I picked each game with logic and reason using my knowledge of college basketball. Winner: Florida My Heart: I picked each game based on my bias opinion of who I wanted to win. Winner: Louisville My Gut: I looked at each game and picked the winners based on my gut feeling, trying my best not to over think it or let my emotions decided. Winner: Florida My Top Seeds: I picked the higher seeded team to win each game. Winner: Ohio State My Coin Flip: I coined flipped every game to decided the outcome. The higher seeds were always heads and I flipped best two out of three for each game. Winner: Georgetown There were 63 possible picks throughout the entire tournament. I will give my results in order of best to worst and
Post a Comment
Read more

My Best Sports Month Ever 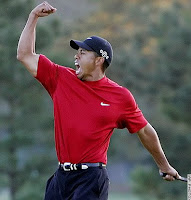 As an avid sports fan, it's gets no better then it does each and ever April. I challenge anyone to come up with a better month in sports then this one. Each April begins with the NCAA Basketball Championship where this year I'll sit and dream of what might have been if Oden and Conely had chosen WFU over OSU. ( Wake was their 2nd choice if you didn't know) Next you have MLB opening day. A time where I can once again watch my Braves do just enough to win in the regular season only to collapse in the fall classic. Then it moves on to the Masters, "A tradition unlike any other" (In my best Jim Nance voice). I love Tiger Woods and I wouldn't be disappointed if he won the next 20 Masters. I'll go on record and say now that no other athlete in the history of sports as dominated his/her sport the way that Tiger has/is. He's better at his sport then anyone else ever at their sport. Yes, even Jordan and basketball. Next we have the beginning of the NBA and NHL
1 comment
Read more
More posts