Showing posts from July, 2009
Show all

Hail To The King 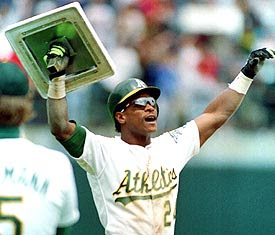 On the day that one of the greatest baseball players of all-time was inducted into the Hall of Fame, I want to dedicate this post to him: Mr. Rickey Henderson

1) Rickey… on referring to himself in the third person:

“Listen, people are always saying, ‘Rickey says Rickey.’ But it’s been blown way out of proportion. People might catch me, when they know I’m ticked off, saying, ‘Rickey, what the heck are you doing, Rickey?’ They say, ‘Darn, Rickey, what are you saying Rickey for? Why don’t you just say, ‘I?’ But I never did. I always said, ‘Rickey,’ and it became something for people to joke about.”

2) In the early 1980s, the Oakland A’s accounting department was freaking out. The books were off $1 million. After an investigation, it was determined Rickey was the reason why. The GM asked him about a $1 million bonus he had received and Rickey said instead of cashing it, he framed it and hung it on a wall at his house.

What does it mean to "Honor your Mother and Father"?

July 23, 2009
I have had a couple of conversations lately with friends who are struggling with the commandment of "Honoring your mother and father", especially in light of the fact that one or both of their parents are not Christians. So what do you do in those circumstances and how far does honoring go if someone is not honorable? Here is an old article I read a few years ago that simply sums it up as good as I have ever read it:

How Do You Honor Your Father and Mother When They are Not Saved?
Answer:

The fifth of the ten commandments that Moses received from God at Mount Sinai says,

"Honor your father and your mother, so that you may live long in the land the LORD your God is giving you. (Exodus 20:12, NIV)

The question we should ask is, what does honoring your father and your mother really mean? The Greek word for "to honor" in this verse means to prize, to fix a valuation upon, to revere, to value. So to honor your father and mother means to hold them in high regard and resp…
2 comments
Read more

My 15 Seconds Of Fame 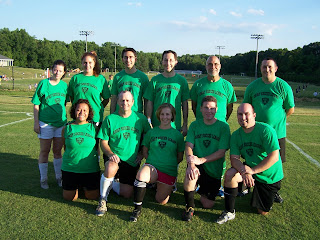 As I reported in an earlier blog, my soccer team began our summer out-door season with an impressive win. I went on to predict that my "Mike G. Kiss Of Death" would soon follow since I had never been on a winning team in my life before. So it wasn't surprising to me that we lost out next 6 games. Then last night came. Maybe it was the fact we had nothing to play for last night in our next to last game of the season or maybe it was the total solar eclipse in Asia, whatever it may have been our "Big Green Machine" played the best game of our teams life last night as we pulled out a stunning 3-0 shut-out victory. (Kudos to MSBC's very own Hank Ferrel for an amazing night in goal)

The most memorable highlight for me was that I scored my first goal ever!!!!!! I guess a blind squirrel does find an acorn every now and then.
1 comment
Read more

How He Loves Us

July 22, 2009
This song is slowly growing on me. This is the best version I have heard yet.

In a news release issued by the U.S. Department of Labor, Secretary Hilda L. Solis said that the increase would affect workers in 30 states, which currently have an applicable minimum below $7.25, and the District of Columbia, which provides that wages must be $1 per hour more than the federal minimum. For families with a full-time minimum wage earner, Solis said, the increase would mean $120 extra per month, which, among other things, would allow the working poor to replace their regular light bulbs with compact fluorescent bulbs, "which would save the family money in the long term and be…
Post a Comment
Read more

July 06, 2009
This whole situation with my friend Aaron and his daughter has caused me to re-examine what my take is on prayer. Before I throw out my questions I'm struggling with, I want to make it clear that Aaron, Kate, and their entire family has been on my heart and mind non-stop since I first heard the news a week ago. My current struggles have nothing to do with the way the prayers have been handled by everyone involved with Kate and everything to do with me working out my thoughts and beliefs on prayer. Now on to my questions (which I have no real answers to at this time)

- Does it really matter to God if one person prays or many? Are prayers answered solely in response to the amount of prayers being lifted to God and the multitude of intercessors? Can and is one person's prayer be just as effective as 1000? 10,000? If so then why ask for people to pray? If not then is prayer more like a popularity contest?

- Does it matter who prays? James 5:16 says, "The prayer of a righteous m…
1 comment
Read more

Praying For A Friend

July 03, 2009
Long, heart-breaking story short: An old friend from high school who is now lives with his family in AZ found out this week his perfectly healthy 5 year old little girl has a golf ball size cancerous brain tumor. She is schedule for surgery today. Please lift up Kate, her family, the doctors, and nurses as they begin what will seem like the longest day of their lives. You can read all about their situation here:

The month of June in 10 words