Showing posts from January, 2009
Show all

A few quick thoughts from Conclave '09

January 30, 2009
A small group of folks from my church have joined me in Duluth, Ga this week for the annual "Conclave" youth pastor's conference. I'll right a more in-depth analysis of the conference once I return. But for now here are my highs and lows:

High
Opening worship session - Todd Agnew lead music and was freak'n awesome and then Francis Chan spoke for about an hour. He was top notch as always and only cemented the fact as to why he is my favorite communicator alive today.

Low
Brock Gil the MC / magician...errrr illusionist. I forgot we are at a baptist conference so you can't call something "magic". I get this feeling Brock tried and failed at making it in Vegas so he turned his attention to Christian entertainment since Christians are notorious for jumping on any kind bad quality entertainment if the words "Jesus", "God", or "Christian" can be labeled with it. (ex. see 90% of all contemporary "Christian" music")

January 21, 2009
the only sport I played in high school was soccer, which isn't saying much since our team was terrible. Most weeks we'd get beat by double digits, which is like getting beat by 100 in basketball. When I hung up the cleats way back in the fall of '91 I never thought I'd be picking them up again. Over the years I've gotten the itch to play again but never had the opportunity or the time. Now I have both so I thought I'd give it a try.

A few weeks ago I signed up to play indoor at the local YMCA. I didn't have an official team so they put me on the Y team that consist of lone individuals like me that want to play but have nowhere to go. Our team consist of 11 players which I'm thinking may be a bit much since only 5 are on the court at a time. My goals for this season are simple: 1) Don't get hurt 2) Don't hurt the team 3) Contribute to the team, and 4) Get in better shape. 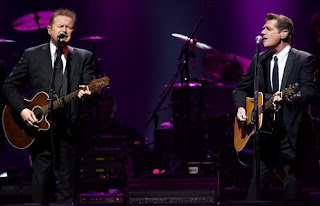 When I heard The Eagles "Long Road Out of Eden Tour" was coming to Greensboro I cleared my calendar and made I was able to get tickets the second they went on sale. The tickets were a Christmas present for Beth but truth be known I was just as excited as she was to see them.

We noticed two things when we arrived at the concert; first was the ridiculous $15 parking fee, and secondly the temperature inside the coliseum. It may have been freezing outside but it was close to 80º inside. Someone must have noticed the sweating crowd and turned it down but it took several hours for the temperature to become bearable. As far as the parking fee, it was an obvious case of the city taking advantage (extortion) of a sold out crowd that had already paid outrageous prices for the tickets.

This and That From The World of a Jesusgreek

Beth and I are going to see the Eagles this Saturday night!!!

Beth, Jacob, and I are going to see David Crowder next month!!!

We got Netflix about a month ago and that combined with the new Roku (http://www.roku.com/) Netflix player that allows you to watch movies instantly on your tv, may be one of the greatest inventions in the last decade. If you have Netflix and do not own a RoKu then you're missing out BIG time!!

My friends Sam and Heidi have a new book out and you can pick it up here: http://www.goodheartministries.com/gpage3.html

The Panthers showed what I have said all season, they are the worst 11-5 team ever. here is how you fix the problem: New GM, new Coach, and new QB.

"24" freakin rocked this past Sunday/Monday!! With the return of Scrubs and Lost this month, this may be the greatest January in TV history. If only we didn't have to …
1 comment
Read more 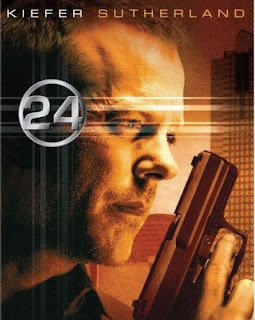 51 Torturing terrorists is like riding a bike. Jack Bauer never forgets.
52 If a suspect mentions your name, while being interrogated by Jack Bauer, you have a 3.26% chance of surviving the next 3 hours.
53 The only reason Jack gave Nina mouth to mouth in Season 2 was because he had to kill her himself.
54 When Jack Bauer says, "I don't know if I can do this anymore", the statement must be loosely translated as, "I can still rip off your head, I just don't know if I feel like I can poop down your neck at this time."
55 Jack Bauer was nominated for an Emmy for playing Kiefer Sutherland.
56 Jack Bauer thinks the word mercy just means "quick interrogation."
57 Chuck Norris counted to infinity - twice. Jack Bauer would meanwhile do something important.
58 When Jack Bauer ran out of ammo, he caught 3 bullets in his chest and used them to reload.
59 Jack Bauer signs his autograph with bullets. So don't ask him to sign any part of your body.
60 When Kim Baue…
Post a Comment
Read more

"24" is back tonight!! OR Jack Bauer Facts Part 1 OR This One's For You Dumont 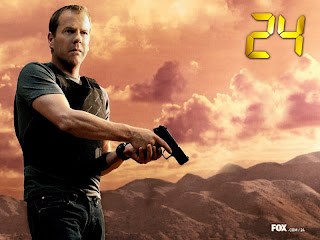 1 Jack Bauer once stepped into quicksand. The quicksand couldn't escape and nearly drowned.
2 There are two hands that can beat a royal flush. Jack Bauer's right hand and Jack Bauer's left hand.
3 When someone asked Jack Bauer if he was afraid of James Bond, he replied "What does 'afraid' mean?"
4 The city of Los Angeles once named a street after Jack Bauer in gratitude for his saving the city several times. They had to rename it after people kept dying when they tried to cross the street. No one crosses Jack Bauer and lives.
5 It takes you 24 weeks just to watch what Jack Bauer does in a single day.
6 Most people would need months to recover from 20 months of Chinese interrogation. Jack Bauer needs a shower, a shave and a change of clothes.
7 If Jack Bauer had been a Spartan the movie would have been called "1".
8 When a convicted terrorist was sentenced to face Jack Bauer, he appealed to have the sentence reduced to death.
9 Some people see the glass…
1 comment
Read more

The Return of Scrubs

January 06, 2009
One of the all-time most creative television shows ever comes back on tonight. Scrubs is not only at a new time and day but a new network. After years of no respect by the higher-ups at NBC, Scrubs makes the jump to ABC. 9:00pm & 9:30pm EST, I can't wait!!

In honor of Scrubs return, I give you the 5 greatest JD Daydreams...

Introverts vs Extroverts in Churches Revisited

January 02, 2009
A few years ago I wrote a blog examining the churches role in reaching introverts and extroverts. It still gets quite a few hits and I even received a very nice email yesterday referencing it. So I thought it may be worth a revisit. Here is an updated version:

I have often read and heard it said that a church will draw people who are most like that particular church's pastor or that the church's congregation take on the personality of their pastor. Before you guys start freaking out and going to see a counselor let me explain. I am an introvert by nature. It completely drains me to do what I do in Sunday mornings, afternoons, and any other time we have a church event that I am in charge of. I've always felt like church and church events were designed for extroverts and this has bothered me a lot over the years mainly because it made me feel like I was less spiritual for not wanting to sing or for not always feeling "like shouting Jesus name from the roof tops." It…
4 comments
Read more

January 01, 2009
The was a good year of book reading. Over half (11 out of 20) of the books I read in 2008 I'd classify as 4 stars. I tried to be a lot more deliberate in my reading choices this year read and not just read whatever book caught my eye or was passed on to me. In 2009 I've decided not to read a single book until I've read through the Bible again. I find myself only reading the Bible as a source of sermon, bible study, or counseling prep and not just for the shear enjoyment of the greatest book ever written . I'm trying a fresh approach to my walk through the Bible this time around as I'll be reading "The Book of God" by Walter Wangerin. Walter has taken the Bible, arranged it in chronological order, and wrote it in novel form. Should be good stuff!!