Showing posts from August, 2008
Show all

My New Must Read Blog 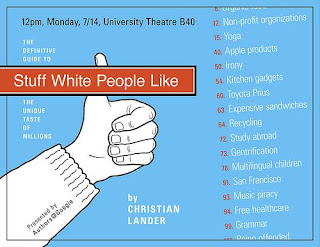 My friend Darryl told me about a blog that at first seemed a bit edgy even for my standards but after looking it over I found myself hooked. The blog is: http://www.stuffwhitepeoplelike.com/

It also is in book form and currently at it's 7th week on the NY Times best seller list.

Amazon describes the book / blog this way:
"They love nothing better than sipping free-trade gourmet coffee, leafing through the Sunday New York Times, and listening to David Sedaris on NPR (ideally all at the same time). Apple products, indie music, food co-ops, and vintage T-shirts make them weak in the knees.

They believe they’re unique, yet somehow they’re all exactly the same, talking about how they “get” Sarah Silverman’s “subversive” comedy and Wes Anderson’s “droll” films. They’re also down with diversity and up on all the best microbrews, breakfast spots, foreign cinema, and authentic sushi. They’re organic, ironic, and do not own TVs.

August 29, 2008
I received a very unexpected but perfect card of encouragement in the mail today from one of my church members. It simply says,

"Every morning, all the stupid people you know get together and plan ways to make your life more difficult. Just thought you'd like to know."

My Thoughts on Donald Miller's Prayer at the DNC

August 28, 2008
Monday night Donald Miller had the opportunity to perform the closing benediction at the DNC. The video above is of that benediction (the sound goes dead for about 3 seconds mid way through but it was the best copy I could find) I for one found the benediction to be as close to perfect as I could have hoped. Don was honest, real, and came across very sincere in his prayer. The problem is that instead of celebrating the fact that a prominent Christian speaker and author like Donald Miller was asked to be there and share the message of Christ with millions of people worldwide, we again have another circumstance of friendly fire.

Todd Friel, the host of "The Way of the Master", spends several minutes being his typical loud-mouthed windbag self as he tore Donald and his prayer apart on his Tuesday radio show. Todd is what is wrong with Christianity. His obnoxious rants are enough to make any follower of Christ ashamed to be called a "Christian". He and everyone like hi…
14 comments
Read more

August 28, 2008
On Donald Miller's new blog, http://www.donaldmilleris.com/ he has posted an ongoing correspondence between him and Barak Obama. If you're a Donald Miller fan then this is a great read. This guy is a genius.

FIRST E-MAIL FROM BARACK:
Dear Donald,
You did it!
Not just yesterday, but every day for more than a year, you did what the cynics said we couldn’t do.
You said the time has come to get beyond the same old tactics that divide and distract us, and you gave people a reason to believe again.
We’re within reach of the nomination, and we are ready to take this country in a new direction.Thank you for your continued support, and for everything you’ve done to make this possible.Barack

MY RESPONSE:
Mr. Obama,
Wow. I’m shocked. How did you get my e-mail address? I signed up on a clip board a cute hippie handed me, did you get my address from her? Do you know her? Can you ask her to call me? Anyway, no biggie, just cool that you wrote.
I wanted to talk to you after the rally but the guy with …
1 comment
Read more

August 27, 2008
What is the "DNC" edition? It's my tribute to the Democratic National Convention. I'm going to say a lot but nothing of substance.

Speaking of the DNC, It still blows my mind how the Democratic party can screw this up so bad. All they had to do was roll out a corpse and he/she would have killed anyone the Republicans put up. But after Michelle Obama's stale speech, Hillary's canned speech, and Bill busy reminding everyone there of the "good old days", the only clear message is that this party is a mess. This convention is setting up as the first in history where the presidential candidate will come out of it with little or no "bounce". At this rate, McCain will win by 20pts in November.

I tuned 34 earlier this month. I got a Wii for my birthday. So far so fun. Beth and the kids enjoy it as much as I do. Even if I do destroy Beth in tennis or knock her out in boxing.

My Quote Of The Week

August 11, 2008
After spending much of my full time ministry life in the United Methodist Church, I found this article very interesting. It's written by Mary Jacobs and she nails the fact that most UMCers are scared to death to mention the "S" word (Satan) or the "D" word (Devil).

Jesus stood up to him. Plenty of Christians talk about him. And some blame all sorts of evil on him. But likely you won’t hear his name tossed around much in a United Methodist Church.

“For the most part, you don’t hear mainline Protestants talking about Satan, the devil or the demonic,” said Jaime Clark-Soles, associate professor of New Testament at Perkins School of Theology. “I think we’ve handed that kind of language over to the fundamentalists.”

Though Methodism founder John Wesley talked about Satan in his sermons, the United Methodist Church has no official doctrine on the devil or the demonic. Few Methodist ministers in the U.S., it seems, preach about Satan as a personal be…
Post a Comment
Read more

August 09, 2008
This past spring I took a group of 15 college students to the Passion ’08 conference in Atlanta, GA. While there, my students felt an indescribable burden for college students not just in our area or country but also all over the world. As we returned home we focused our prayers on what God’s leading was for our group. Through much prayer and discussion we felt God was leading our group to Mexico City. Mexico City has over 100 college campuses but only 45 have some type of Christian influence. We made a few phone calls and ended up connected with Campus Crusade. Now Beth, myself, and 10 other college / young adults are heading to Mexico City. We’ll spend the first three days assisting Campus Crusade with planting seeds on the 55+ campus that currently have no way to hear the amazing message of Jesus and the final three days assisting Louie Giglio and Passion with the Mexico City Passion Conference where over 20,000 Mexican college students are expected to attend. I am writing you beca…
Post a Comment
Read more

August 07, 2008
There's a Baptist church across the street from the entrance to my neighborhood that has finally pushed me over the edge. I will try to keep the name hidden so I won't embarrass them . Will just call them GWBC. GWBC has done a long list of things that have infuriated me. So much so that there has been a many of mornings as I drive past it I ask God why he hasn't rained down fire from the sky to destroy yet one more "church" that makes Him look bad.

Example one: When their previous pastor was there (a friend of mine) they asked him to resign because they weren't set up to handle his "special needs" sons. Do you know what their "special needs" were? They were BLACK! He and his wife had adopted two African-American boys and his white church couldn't handle it.

Example two: GWBC was having a "trunk or treat" last Halloween. The parking lot was full of visitors going car to car to collect candy. (A very progressive outreach for this…
Post a Comment
Read more

August 05, 2008
It has taken me a couple of weeks to even begin to put into words my experience during our student ministries annual mission trip. And even now I'm reduced to short sound bite highlights as this was one of those, "you had to be there" kind of experiences. This summer we served for a week with Youth works (http://www.youthworks.com/) in Atlanta, Ga. I've decided to break this walk down memory lane into three parts: The Good, The Ugly, and The Beautiful.

The Good
1) The places we served were all absolutely amazing
- http://www.samhouse.org/ (aka Cafe 458)
- http://www.thefrazercenter.org/
- Set Free (daycare for needy kids)
- Bethlehem Senior Center http://www.wesleycenters.org/seniorcenter.asp
- Atlanta Community Food bank http://www.acfb.org/
2) Our youth and adults were all pushed way out of their comfort zones
3) We faced more adversity on this mission trip then any other I have ever been on
4) The bonding that took place between our youth will be a part of their lives forev…
2 comments
Read more

My Movie Review: The Dark Knight

Long Review:
My buddy Ryan has written a dead on review of the film. Check it our here: http://thegr8wideopen.blogspot.com/
2 comments
Read more
More posts